The port of Vukovar marked long-term cooperation with the port of Constanta, Romania

You are here:
News 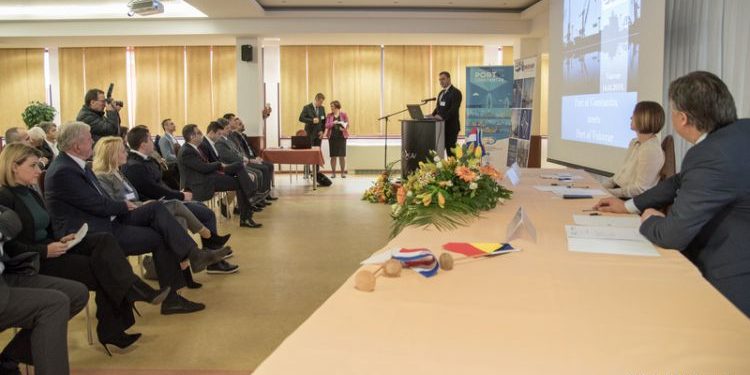 The second meeting between the Port of Vukovar and the Port of Constanta is being held in Vukovar today, marking the largest Croatian river port and the Romanian Danube-Black Sea port giant, they mark long-term cooperation, present its results and, through mutual conversations and conversations with business partners, create the potential for deepening mutual relations.

“The port job is specific. Our mission is to efficiently load and unload all types of cargo and store it, but if we do not have a economy in the hinterland, there is no transhipment,” Kupresak said.

He added that the best post-war year was 2006, when the port of Vukovar transhipped 915.000 tons of cargo. However, an economic crisis and recession soon followed, with the port transhipment only 175.000 tonnes in 2009, 249.000 tonnes transhipped last year and 350.000 tonnes planned for 2018.
Kuprešak pointed out that the largest shipping business partner is the Romanian TTS, which has recognized the port of Vukovar as expeditious and efficient, with an optimal price-quality ratio.

The port of Vukovar employs 68 workers, is in concession until 2026, it’s located on the Danube which is navigable throughout the entire year and is at the intersection of European Corridor 5C, with road and rail routes nearby, and with good equipment, all this makes a significant investment potential.

“We are trying to increase traffic, but also to influence legislation related to waterway traffic,” Patrichi said, adding that in 2015 the transit between the port of Vukovar and Constanta was 75.000 tonnes and now is at 300.000 tonnes and is planned to increase.

The director of the Bucharest shipping company TTS Catalin Petrea emphasized the very good and long cooperation with the Port of Vukovar.

Vukovar mayor Ivan Penava reminded that the city has historically developed primarily thanks to the Danube and the port, which is of strategic importance for the city. He emphasized that Constanta is a business partner to all ports on the Danube and that he expects the cooperation to expand.